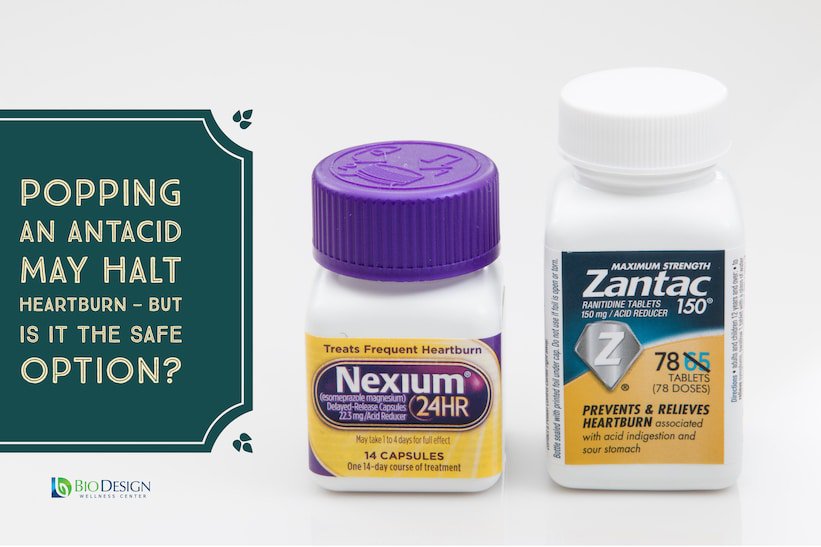 The drug was designed to reduce the production of acid in the wall of the stomach, thereby preventing ulcers and helping to heal ulcers found in the esophagus, stomach, and small intestine. Today, there remain a number of PPIs on the market, including:

Problems arose when it was discovered that more than half of people taking PPIs did so without a documented medical need. And 80 percent of those were found to be consuming lower doses of the prescribed medicine — about the same as those found in over-the-counter versions of heartburn cures.

The Problem with Proton Pump Inhibitors

The problem with PPIs and other medications used to reduce stomach acid isn’t that they don’t do what they are expected to do. They perform that task quite well. The thing is, generally, stomach acid is a good thing. It helps us digest our food, it’s hell on harmful bacteria and unwelcome viruses, and it improves absorption of certain nutrients.

So, when we take medication to reduce stomach acid, we inhibit the absorption of key nutrients, including B vitamins, which, among other tasks, keeps homocysteine levels in check. When homocysteine levels get high, the risk of disease also increases. And by diseases, we’re talking about dementia, stroke, depression, anxiety, estrogen-related cancers, and other disorders. Adding fuel to the mix, PPIs also reduce the absorption of minerals such as calcium and magnesium.

As functional medicine practitioners, we here at BioDesign Wellness Center take a different route when it comes to treating indigestion. We find the root cause or causes of indigestion and then we deal with it. And this starts with dissuading our patients from taking PPIs or their over-the-counter doppelgangers. There are safer paths that you can take to address your heartburn or stomach acid issues.

When it comes to our treatment of gastroesophageal reflux disease (GERD), acid reflux, and ulcers, we employ a very specific framework — one that accounts for three highly specific stages: discovery, restorative practices, and the optimization of your overall health and wellbeing. This approach considers the role of lab tests, diagnostics that tell us about the state of your nervous system, detoxification, nutrition, hormone therapy, the how physical activity may all play a part in positively impacting your health. We have found that within three months of treatment, most of our patients no longer require PPIs or over-the-counter medicines to manage their heartburn issues.

We test and treat for low levels of acid production, because acid reflux can actually be caused by too little stomach acid — especially among our older patients. We also test for hypothyroidism, stress, gut dysbiosis, diet habits or overeating, a weak stomach lining, poor bile production and gallbladder issues.

The bottom line is this: If you’re ready to dump the heartburn medications out of your medicine cabinet and join us in exploring the root causes of your stomach issues, please call us at (813) 445-7770.

Disclaimer: The information in this blog post about the drawbacks of antacid is provided for general informational purposes only and may not reflect current medical thinking or practices. No information contained in this post should be construed as medical advice from the medical staff at BioDesign Wellness Center, Inc., nor is this post intended to be a substitute for medical counsel on any subject matter. No reader of this post should act or refrain from acting on the basis of any information included in, or accessible through, this post without seeking the appropriate medical advice on the particular facts and circumstances at issue from a licensed medical professional in the recipient’s state, country or other appropriate licensing jurisdiction.