Many people diagnosed with a mental illness or other psychiatric condition tell similar stories. They visit their primary care physician complaining of anxiety, overwhelming sadness, fatigue, joint or muscle aches and pains, brain fog, and other general symptoms. Their doctor orders a limited series of lab tests, examines the results, and finds “nothing wrong.” They are then either given a diagnosis on the spot or referred to a psychiatrist.

Ultimately, they are told they have depression, anxiety, chronic fatigue syndrome, fibromyalgia, or some other diagnosis that doesn’t reveal what’s really going on or how to cure it. They are sent home with one or more prescriptions for antidepressants, pain relievers, and other medications that, at best, provide only temporary relief. Sometimes the medications provide no relief or even make the condition worse. 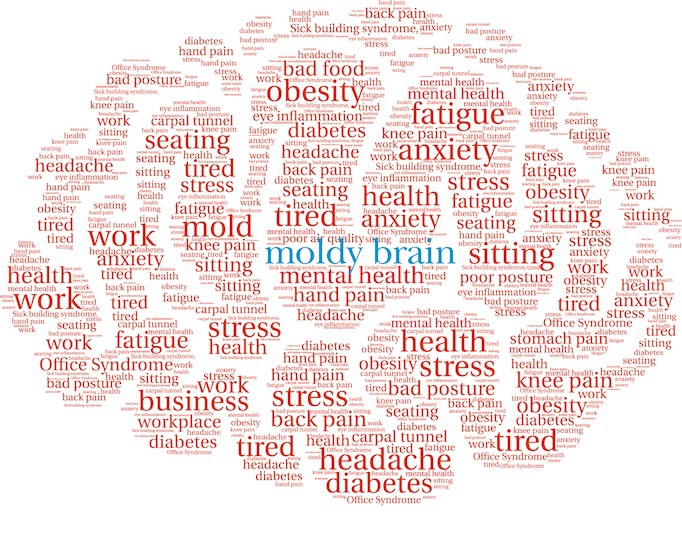 The story changes only when a patient is fortunate enough to encounter a doctor who understands the effects of environmental toxins on the brain… a doctor like our own Dr. Matt Lewis, or one like Mary Ackerley, MD — a board certified integrative and holistic physician as well as a classically trained board certified psychiatrist who specializes in the natural treatment of chronic fatigue, mold and biotoxin illness, depression and anxiety. In addition to her education and training as a psychiatrist, Dr. Ackerley (as well as our own Dr. Matt Lewis) has specific training in diagnosing and treating environmentally acquired illness.

(Editor’s note: Dr. Lewis and Dr. Ackerley both attended the inaugural ISEAI Conference — International Society for Environmentally Acquired Illness —in early-May of this year in Phoenix, Ariz., where Dr. Ackerley was one of the featured speakers.)

According to Dr. Shoemaker — a Roswell, NM-based pioneer in mold and biotoxin illness treatment — about 25 percent of the population is susceptible to biotoxins. Coincidentally, as Dr. Ackerley has been known to point out, “When you add up all the psychiatric illnesses that people are exposed to, it’s actually about 25 percent of the population that has been diagnosed or is said to have psychiatric illness.”

Could it be that depression, anxiety, bipolar disorder, schizophrenia, and other medical conditions that cannot be tested for, such as chronic fatigue syndrome and fibromyalgia, may actually be related to infections or environmental toxins?

Although we here at BioDesign Wellness cannot claim that all of these illnesses and certain others are caused solely by biotoxins, biotoxins seem to contribute significantly. The underlying mechanism seems to be that infections and/or biotoxins cause neuro-inflammation, which may be at the root of numerous brain disorders, including mood disorders (depression and bipolar disorder), schizophrenia, Alzheimer’s, and other inflammation-related disorders such as chronic fatigue syndrome and fibromyalgia.

To see this in action, it’s helpful to review one of Dr. Ackerley’s very first case studies showing a connection between biotoxins and psychiatric illnesses:

What fascinates Dr. Ackerley is that so many psychiatric illnesses are related to inflammation. What fascinates us at BioDesign Wellness Center is that so many illnesses, psychiatric and otherwise, are related to inflammation and that the underlying cause is often an infection or an exposure to environmental toxins along with a genetic inability to flush those toxins from the body. (Approximately 25 percent of the population has one or more genetic anomalies that interfere with the body’s ability to detoxify itself.)

Infections and toxins that are well known for creating psychiatric complications include the following:

Inflammation in the brain can be initiated by certain infections or by exposure to mold or certain other toxins, producing symptoms characteristic of one or more psychiatric illnesses. A person may even be diagnosed as having a psychiatric illness, even though that is not what is really going on. The root cause is infection or toxins causing inflammation in the brain and possibly throughout the body’s central nervous system (CNS). We often see patients here at our Tampa Functional Medicine practice who have been exposed to mold with additional neurological symptoms, including numbness or tingling in the extremities (hands or feet), tremors, fatigue, or migraines.

Cytokines in Depression and Alzheimer’s

Several studies provide evidence of a connection between depression and significantly higher concentrations of inflammatory cytokines, including tumor necrosis factor and interleukin-6.

Inflammatory cytokines play a role in Alzheimer’s disease. At least one study that examined the cerebral spinal fluid in people with Alzheimer’s found higher concentrations of the cytokine TGF-beta, which is often found to be elevated in people exposed to and made ill by mold.

Inflammation in the brain is often referred to as “leaky brain” because what happens in the brain is similar to what happens in the gut with leaky gut syndrome — protective membranes become more permeable, allowing substances to pass through that should be blocked. Cytokines increase the permeability of the blood-brain barrier, increasing the stress response in the brain, which is likely to cause a breakdown of tryptophan, an essential building block of serotonin.

Dr. Ackerley often sees patients in her practice in Phoenix, Ariz., with symptoms of depression or anxiety who complain of fatigue and then add, “My brain just doesn’t work the way it used to.” We have observed this in our practice in Tampa, as well. Many BioDesign Wellness patients report brain fog, impaired memory, or an inability to think clearly. The root cause of this cognitive decline is often found to be associated with inflammation triggered by biotoxins found in a water damaged building. In fact:

Diagnosis: Is It a Biotoxin Illness or Something Else?

When a patient has symptoms of a mental illness, or brain or psychiatric disorder, one of the first determinations a doctor needs to make is whether the symptoms are related to an underlying infection or biotoxin exposure. Unfortunately, most doctors do not even consider the possibility of infection or biotoxin exposure. They may suspect mold if a patient has sinusitis, asthma, or chronic lung infections, but they don’t suspect mold in relation to other conditions, such as depression, bipolar disorder, anxiety, chronic fatigue, or fibromyalgia.

At BioDesign Wellness Center, we are one of the few exceptions. In fact, during our initial examination, we screen patients for tick bites, exposure to mold, and previous infections that may have triggered certain symptoms. We are aware that neuro-inflammation is common among people experiencing depression, anxiety, fatigue, generalized pain, and other symptoms associated with psychiatric disorders.

When a patient experiences symptoms consistent with certain psychiatric conditions and/or chronic fatigue syndrome, fibromyalgia, or other vague diagnoses, we consider biotoxin illness a likely cause or contributing factor, especially under these conditions:

Unlike conventional doctors, who are unlikely to consider mold or tick-borne illness, we routinely ask our patients about any exposure they may have had at home, work, or school to visible mold or hidden mold that is common in water damaged buildings. We also routinely ask about any tick bites the patient may have had in the past and about any exposure to areas where Lyme disease is prevalent — a person may have gotten bitten and not even realized it.

If we suspect a biotoxin-related illness, we then run tests to look for markers that indicate the presence of the biotoxin(s) or the body’s reaction to the biotoxin(s).

At BioDesign Wellness, we have several treatments protocols for people exposed to water damaged buildings or other sources of biotoxins. We usually start by preparing the body to detox, which accounts for making sure vitamin, mineral and macronutrients are adequately being absorbed and utilized by the body. For some this may require healing the gut or supporting the liver.

The Shoemaker Protocol is a 12-step process for eliminating biotoxins and any infectious agents that are releasing biotoxins into the body. It involves addressing the source of the exposure (for example, having mold professionally removed from the home), detoxing with Cholestyramine, eradicating any antibiotic-resistant bacteria (referred to as MARCoNS) from the sinuses, correcting elevated serum anti-gliadin antibodies through avoidance of gluten, correcting androgen hormone levels to support the endocrine system, and several additional steps to improve cell function and reduce inflammation.

Diet plays a key role. People who suffer from biotoxin-related illnesses need to avoid sugar and simple carbohydrates that the body quickly converts to sugar. They also need to avoid gluten. Patients are typically required to adopt a very low-carb diet similar to the ketogenic or paleo diet — whole foods (no processed foods), high fat, moderate protein, and very low in carbohydrates.

If you suspect you may be suffering from a biotoxin-related illness or you have been bouncing around from one doctor to another with little or no explanation or relief from your symptoms, we encourage you to schedule an appointment to see a doctor who has experience in diagnosing and treating biotoxin-related illnesses. This is not something you can or should do on your own. You need someone who understands these types of illnesses, knows which lab tests to order and how to interpret the results, and is well trained on the various medications, supplements, diets, and lifestyle adjustments that are most effective in restoring health.

Keep in mind that you won’t start feeling better if your doctor cannot identify and treat the underlying cause. If conventional medicine is not delivering the outcomes you desire and deserve, try a different approach — one that focuses on addressing the underlying cause and not just masking the symptoms.

Disclaimer: The information in this blog post about the effects mold and other biotoxins have on the human brain, is provided for general informational purposes only and may not reflect current medical thinking or practices. No information contained in this post should be construed as medical advice from the medical staff at BioDesign Wellness Center, Inc., nor is this post intended to be a substitute for medical counsel on any subject matter. No reader of this post should act or refrain from acting on the basis of any information included in, or accessible through, this post without seeking the appropriate medical advice on the particular facts and circumstances at issue from a licensed medical professional in the recipient’s state, country or other appropriate licensing jurisdiction.