Toxic Mold Illness in the News and How to Treat It

While COVID-19 has dominated the news cycle for the last 60 days or so, reading between the lines reveals a host of other health issues that we should be aware of, including mold-related illness. 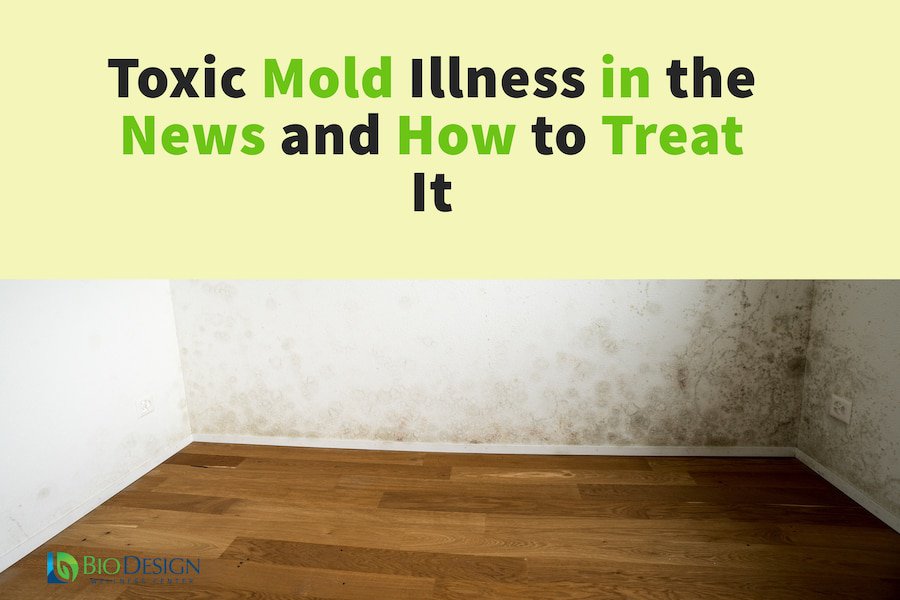 From a strictly news perspective, here’s what’s happening across the nation with respect to some of the dangers mold presents in our daily lives:

Also in Florida — and very close to our Tampa functional medicine clinic — is the ongoing saga of Harbor Bay at MacDill Air Force Base. There, as we previously reported (see: Update on Toxic Mold in Tampa and Responding to the Mold Outbreak at VA Bay Pines Center), a lawsuit filed in U.S. District Court’s Middle District of Florida accuses the six companies operating the privately run housing of ignoring complaints about mold, conducting shoddy remediation work, and then not revealing mold test results to those who live in the houses in question. The lawsuit, filed in December of 2019 by five service members and their families, has yet to be resolved. But as a result of pressure by military families around the nation, the National Defense Authorization Act (NDAA), which was passed in mid-December, establishes a bill of rights for military families living in base housing and ensures that contractors are held accountable for housing issues that are not addressed quickly, such as those experienced by residents of Harbor Bay at MacDill.

If you suspect that you or a loved one is experiencing symptoms of exposure to toxic mold or a mystery illness that other doctors have been unable to diagnose, we here at BioDesign Wellness Center may be able to help. Our approach begins with a process of discovery — in order to determine if your symptoms match those of mold illness. We have you complete a symptom checklist survey, which one of our doctors’ reviews with you during your initial visit.

For people who are susceptible, exposure to mold can trigger a condition referred to as Chronic Inflammatory Response Syndrome (CIRS). CIRS is a multi-system, multi-symptom illness. Symptoms differ from one person to another based on where the inflammation is most predominant. For one patient, CIRS looks like itchy skin, brain fog, and sinusitis. Another patient may have fatigue, joint pain, leg cramps, and memory loss. Many patients have more than a dozen symptoms impacting various systems of the body, including immune, hormonal, neurological, musculoskeletal, brain, digestive, respiratory, and cardiovascular.

We compile and examine a detailed history or timeline of any previous or current mold exposure. Frequently, patients are reminded of a time they lived or worked in a moldy environment, only they never connected it to why they felt lousy at the time and why they’re suffering now, perhaps years later. Suppose your living conditions five years ago included mold. If we look at your symptoms today, it’s quite possible that you can attach those current symptoms to the time of the earlier exposure.

If we suspect that your symptoms may be related to toxic mold, we order several lab tests to confirm or rule out mold-related illness. These include:

The three lab tests we order align with the three ways mold can make a person ill:

Our approach to treating mold illness is based on our many years of experience and on the work of three of the leading doctors in this area: Dr. Ritchie Shoemaker, who first linked a variety of illnesses to mycotoxins; and doctors Neil Nathan and Joseph Brewer, who expanded the discussion of mold-related illness to include autoimmunity, colonization, and sensitivities to other environmental toxins.

We believe there are three ways mold can make a person ill and that you can have all three.

Tailoring Treatment to Each Individual Patient

Based on each patient’s symptoms, we test to determine which of the three ways the mold is making the patient ill, because each way calls for different treatments. For example, colonization may require dietary adjustments, probiotics, and other supplements to restore a healthy balance of microbes in the GI tract, whereas toxicity would require detoxing.

We also look for any symptoms indicating that the mold is negatively impacting the brain, which is common with mold illness. We often see a loss of executive function, memory loss, inability to think clearly, and disorientation. In these cases, we order a brain MRI with NeuroQuant to measure more than 40 different brain structures, checking for atrophy and inflammation.

Based on the results of the MRI, the treatment plan may also address brain health. Treatment may include using specialized peptides that signal for reduction of inflammation and for repair in the brain. We may also include IV therapy using phosphatidylcholine to support reestablishing healthy brain tissue and reducing inflammation, and hormone replacement therapy to reduce symptoms and support brain health.

If necessary, we also begin a repair protocol that assists the body in detoxification and reducing inflammation. This is accomplished using various medically supervised supplements and binders that pull toxins out of the body.

During treatment, we monitor progress through the symptom checklist and follow-up labs, testing for mycotoxins in the urine and blood markers that indicate inflammation. Ultimately, you should start feeling better, confirming the diagnosis of mold illness.

Why Isn’t Everyone in My Home/Office Sick?

Keep in mind that everyone reacts differently to mold, so just because most of the people in your home, workplace, or school aren’t showing symptoms doesn’t mean you can rule out mold as the cause. Exposure to mold or mycotoxins alone may not be enough to cause illness. Other factors may combine with your mold/mycotoxin exposure to trigger illness, such as infection, a stressful event or chronic stress, poor diet, sedentary lifestyle, concussion, sports injury, car accident, slip or fall, and exposure to other environmental toxins. There are many more, but these are some of the more common factors we see in our practice that, when combined with exposure to mold, trigger illness.

What’s important is that, if you’re feeling ill, you get examined and tested by a doctor to identify the root cause(s) of your illness and have them addressed. Merely treating the symptoms is worse than sweeping the problem under the rug, because whatever is ailing you will only get worse and, over many years, could cause irreversible damage.

Disclaimer: The information in this blog post about mold illness testing, diagnosis, and treatment is provided for general informational purposes only and may not reflect current medical thinking or practices. No information contained in this post should be construed as medical advice from the medical staff at BioDesign Wellness Center, Inc., nor is this post intended to be a substitute for medical counsel on any subject matter. No reader of this post should act or refrain from acting on the basis of any information included in, or accessible through, this post without seeking the appropriate medical advice on the particular facts and circumstances at issue from a licensed medical professional in the recipient’s state, country or other appropriate licensing jurisdiction.