If you frequently feel bloated after eating or you experience repeated bouts of abdominal pain or discomfort, gas, cramps, diarrhea, or constipation, you probably already suspect dysfunction in your gastrointestinal (GI) tract, also known as your digestive system or “gut.” However, the problem may not be with your digestive system itself but what is inside a part of it, specifically the microorganisms living in your small intestine. 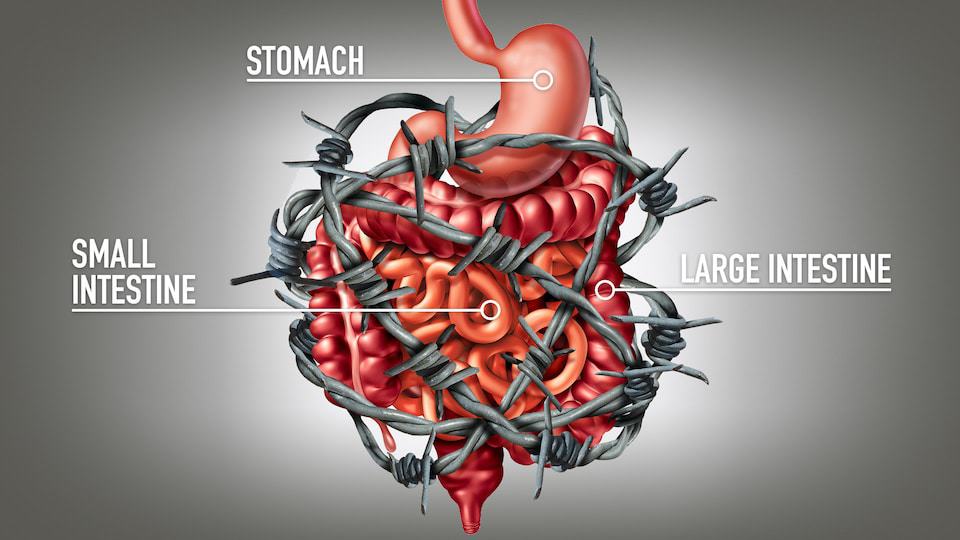 Bacteria and other microorganisms (both beneficial and potentially harmful) naturally reside in both the small and large intestines. Beneficial microbes perform essential functions, such as producing nutrients that the body cannot obtain from food alone. However, when bacteria (good or bad) multiply too fast in the small intestine, it leads to a condition called small intestinal bacterial overgrowth (SIBO), which results in symptoms described at the beginning of this post.

Left untreated, SIBO can lead to nutritional deficiencies, unplanned weight loss, and osteoporosis. SIBO can also damage the lining of the small intestine, which can cause increased intestinal permeability (aka leaky gut) — a condition in which large protein molecules pass through the intestine into the bloodstream, triggering immune reactions that can result in food allergies or sensitivities, chronic inflammation, and autoimmune diseases.

If you have been experiencing any of the symptoms of SIBO, you have probably tried numerous over the counter and prescription medications to treat the symptoms — antacids, laxatives, and anti-diarrheal preparations. Perhaps they helped for a short time, but they probably did not provide the long-term relief you were searching for. That’s because these medications treat only the symptoms, leaving the root cause untouched.

With SIBO, it’s very important to treat the condition at the root instead of masking the symptoms.

Who is at Risk for SIBO?

Several factors place a person at an increased risk of developing SIBO, including the following:

SIBO is easy to diagnose through the use of non-invasive hydrogen and methane breath testing. During the test, you drink a small amount of test sugar and then blow air into a bag at regular intervals. Tests results indicate whether you have SIBO.

At BioDesign Wellness Center, we also perform the following tests:

Conventional treatments for Small Intestinal Bacterial Overgrowth are often limited to the use of antibiotics and dietary restrictions (including avoiding FODMAPs, as explained later in this post). However, this treatment approach has severe limitations. Underlying causes of SIBO must be addressed, including these common causes:

An effective SIBO treatment plan needs to address not only the bacterial overgrowth but also all the underlying causes of that overgrowth; for example:

In each of these cases, treating the underlying cause of mall Intestinal Bacterial Overgrowth, in addition to reducing the microbial population in the small intestine, leads to a better long-term outcome.

What About the Low FODMAP Diet?

FODMAPs are foods containing hard-to-digest carbohydrates and sugar alcohols. (FODMAP stands for Fermentable Oligo-, Di-, Mono-saccharides And Polyols.) The low FODMAP diet is typically used to treat IBS and other functional gastrointestinal disorders (FGIDs), but it can be very useful in SIBO treatment, as well. Keep in mind, however, that diet is only one of the many possible contributing factors — all contributing factors must be addressed.

For many people with SIBO there a few commonly known trigger foods, so not all FODMAP foods need to be avoided or eliminated from the diet. In fact, a diet that is too restrictive can lead to nutritional deficiencies and cause people to abandon the diet altogether. In our experience, the most common trigger foods for SIBO are:

Every person is different, so we work closely with patients to identify their trigger foods and make targeted dietary adjustments, so the diet is easier to adopt.

What are the Treatment Options for SIBO?

At BioDesign Wellness Center, we don’t believe in masking your symptoms with dangerous medications. We realize it’s important to treat not only the bacterial overgrowth but also the conditions that may have caused that overgrowth. Our treatments are tailored to the individual and may include the following:

We’ll utilize the 5 Pillars of Health to balance your gut bacteria and treat your SIBO effectively. Our doctors know how to prevent your SIBO from coming back, and you’ll be able to enjoy a life free of bloating, gas, diarrhea, and other unpleasant symptoms.

If you’ve been unsuccessful treating our SIBO with a traditional approach, our doctors can probably help to eliminate your symptoms once and for all. By understanding the 5 Pillars of Health and making changes in your lifestyle, you’ll be able to live a life free of SIBO once and for all. Call our customer experience manager, Lori, at (813) 445-7770 to schedule a consultation.

Disclaimer: The information in this blog post about Small Intestinal Bacterial Overgrowth (SIBO) is provided for general informational purposes only and may not reflect current medical thinking or practices. No information contained in this post should be construed as medical advice from the medical staff at BioDesign Wellness Center, Inc., nor is this post intended to be a substitute for medical counsel on any subject matter. No reader of this post should act or refrain from acting on the basis of any information included in, or accessible through, this post without seeking the appropriate medical advice on the particular facts and circumstances at issue from a licensed medical professional in the recipient’s state, country or other appropriate licensing jurisdiction.